I wanted to make a simple amigurumi animal, and I chose a hedgehog:

The pattern is actually very similar to a mouse, since it is based on a drop-shaped body, although hedgehog’s ears are smaller. I added a cardboard base in the inside to make it more stable. Also, when sewing the eyes I tried to make them look “alive” by leaving a tiny clear area that looks like a sparkle.

This is the pattern for the body and the ears:

I sewed the prickles all over the body, and applying some eye shadow with a little brush I highlighted some details at the snout, between the eyes and among the prickles.

I will keep thinking on new patterns; maybe in the future I can build Noe’s ark =P 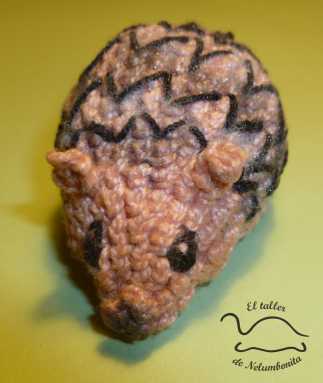 This photo shows the details of the hedgehog. Brown eye shadow between and around the eyes and black shadow on the snout and among the prickles. I also applied some white eye shadow to the prickles, since I wanted it to be a salt-and-pepper hedgehog

Amigurumies are crocheted or knitted stuffed toys. This is actually a Japanese art, where different figures (mainly animals) are crocheted and then stuffed with cotton, cloth or seeds. Once we get to know the technique, we can make our own designs. There are several simple patterns in the Internet that we can use as an easy start. This mouse is an example:

This little mouse is easy to make. Click on the image to open tutorial (in Spanish)

Learning how to make spheres may be very useful for many designs, since most amigurumies are made of several spheres of different sizes.

Ragamuffin, a character from “Lenore, the cute little dead girl

Inspired by the videogame “Teeworlds”

This week brings us a new amigurumi animal. This giraffe is really easy to make, and the necessary materials are quite cheap. We need:

– Brown yarn or thread (same material as the yellow one).
– Brown lace. In our case we’ve re-used an old shoelace.
– Cotton balls and sewing thread.

Here you can find the pattern that explains how to make the giraffe.
The pattern does not explain how to add the limbs (which are made of shoelace) or the mane of the giraffe, but this is really easy to do. For fixing the limbs and the little horns into the animal’s body just fit the lace on one of the holes of the crochet pattern, and put a few stitches to secure it. The process is the same for the tail, but in that case you can fray the end of the lace to make it look like fur. To make the mane, tie several short yarn threads forming a row along the neck and fray them. Finally, put a few stitches to make the eyes and accentuate the snout, and here it is!